Help! My Cat Is Ghosting Me & I Don't Know What To Do About It

My cat Yoshi is ghosting me, and I don’t know what to do about it. When I say ghosting, I don’t mean that a ghost cat is haunting me (What do ghost cats even say? Boo mew?) but the other kind of ghosting — the kind where a date or potential partner suddenly stops all communication with you without giving any explanation and disappears from your life.

I’ve been ghosted before but never by a beloved pet.

As a ghostee, it’s hard not to take ghosting personally especially when it’s your cat and he isn’t allowed outside, so he can’t physically disappear. Yoshi has to make a real effort not to see me and that’s not his thing — expending extra energy.

When I come back from the gym, he doesn’t ask me how it went or talk to me about his goals and dreams. He’s completely uninterested in what’s happening in my life and I can tell if he could, he’d be rolling his eyes when I ask him to stop ripping up the toilet paper or begging for people-food. I have no idea what I did to have caused this catitude.

Yoshi and I have always been close, some might say too close or that I’m a little obsessed with him. Out of our four cats, Yoshi has always been my favorite. I’m not exaggerating when I say he’s the most beautiful cat ever with his fluffy gray and white fur, distinct geometric markings, and adorable tufts of fur between his toes. I love him so much, I even let him drink from my water glass, which isn’t a privilege I extend to everyone. 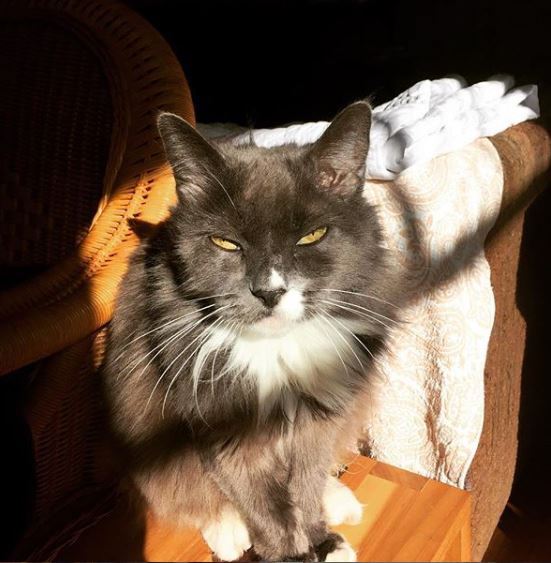 It’s not just Yoshi’s beauty that makes him special; it’s his dry sense of humor, his artistic eye, but most importantly, it’s his obvious and over-the-top affection for me. Pro-tip if you want to be top cat, make sure everybody knows how much you adore me, and how I’m your human.

When Yoshi first started ignoring me, I thought maybe he was only benching, breadcrumbing, or Caspering me, but then I noticed that all my texts had been left on read. I rationalized this by reminding myself that he has no opposable thumbs, is an unreliable texter at best, and misuses emojis all the time.

His next step was to block me from all his social media. Who was going to manage his Facebook page now or curate his Instagram posts? I understood that sometimes you don’t want your family to have access to your posts. He always preferred to nap rather than share a photo or respond to a comment anyway.

But there was no denying that something was up when he’d always leave the room when I came in and would never look me in the eye. He usually loved being held but couldn’t get out of my arms fast enough when I picked him up. Did he have some pressing engagement that I didn’t know about? Why was he so busy? He’d retired from modeling years ago and his exterminating career had never taken off — killing bugs didn’t fill him with joy.

When Yoshi needed affection, he now went to my boyfriend for it. Since I didn’t know what I had done to make him reject me, I needed to go on a fact-finding mission. Although he wasn’t speaking to me any longer, I did what anyone in my situation would do — I set up some fake profiles and cyberstalked him. I stopped short of catfishing him — even I knew that you don’t catfish a cat.

After getting as much information as I could, I went on to plan B: rectifying the situation. 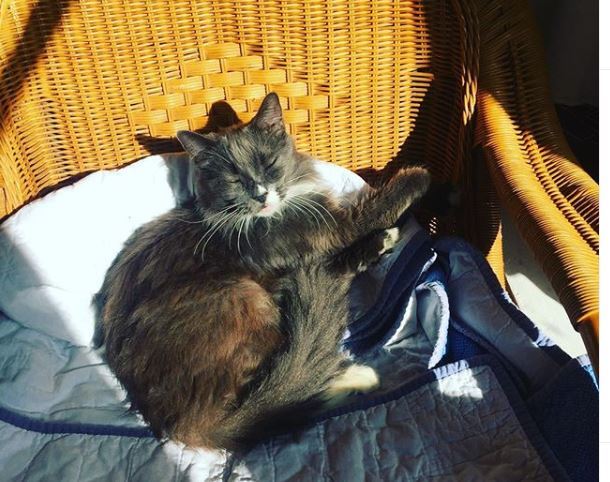 First I tried talking to him, but he just yawned in my face. Then I tried dabbing tuna water on my wrists, behind my ears, on the inside of my elbows, and on the back of my knees as if it were the finest perfume… but still Yoshi stayed clear of me.

Perhaps, because Yoshi has a very cultured palate, he was punishing me for the food I was feeding him. I bought a selection of gourmet cat food. Sure, I’d have to eat ramen noodles for a week, but it would be worth it if it worked. However, Yoshi refused to eat it and the ghosting continued.

I was running out of ideas when I was reminded of one of the ironies of cat behavior, which is how attracted they are to people who don’t like them. Every time my cat-hating friend comes over, Yoshi can’t stay away from her. I think he feels some affinity with her because he doesn’t like cats either. All I had to do to get Yoshi to stop ghosting me was to give him a dose of his own medicine but not the kind wrapped in butter or cheese — the bitter kind — I’d ignore him and give all my attention to my other cats.

When Yoshi entered a room, I left. When he wanted to play and no one else was around, I pretended not to understand. The more I ignored him, the more he warmed up to me. Although I was relieved, I didn’t let down my guard immediately and continued to play it cool.

My reverse-ghosting worked, and things went back to the way they were — just in time for cuffing season. I’m not sure if it was Yoshi who changed or the weather, but we’re at a good place again.

Now, if I could just get our ghost cat Demetrious to stop knocking things off the table at night everything would be perfect.