We made eye contact across the nearly black room. His eyes, two wide green saucers, blinked slowly in the darkness. He mewed softly before leaving his perch at the window to wind his way cautiously through my legs, looking for love, food, or a combination of both. The cat, clearly unable to tell time, didn’t know that despite the deep black winter sky, it was only 4 pm and several hours before his dinner time.

It had been about a month since I had brought home Paul — a regal, 14-pound absolute unit of a cat — from my local shelter. Having been on the streets for the first two years of his life, Paul wasn’t exactly used to casual human contact. He wasn’t scared necessarily, but he was certainly suspicious of a warm home, free food, and someone to pick up his poop all the time. As a native New Yorker, Paul is of course aware that very few things in life are actually free.

And it’s true. I, who had loved Paul unconditionally from the very second I saw him, did have an ulterior motive in treating him like a king: making him as equally obsessed with me. With the biting cold preventing me from leaving and a couple of hours to spare before I had anything meaningful to do, I had a rather weird idea. What if I read my cat’s tarot cards? What if I got a little insight into what makes him tick aside from food and behind-the-ear scritches? What if I got to know the real cat?

I pulled out a deck of tarot cards I keep for parties and spread them facedown across my white duvet. Paul was instantly intrigued.

Deciding that perhaps a simplistic tarot formation for an animal who wouldn’t understand any of what was happening at all may be the correct course of action, I let Paul choose his three cards. Darting across the bed, nails stretched, it wasn’t long before he identified the three that ~spoke~ to him.

I placed the three selected cards face up on the bed in the order he picked (read: attacked) them. I was ready to divine Paul’s past, present, and future.

The Past, Present, & Future Tarot Formation

This easy three-card tarot spread tells a story with a beginning, middle, and end and can be a lot more satisfying than other tarot formations, as it offers more concrete “answers.” And, of course, getting an animal to pick out 12 separate cards can pose a bit of a challenge. You can ask the deck a specific question or you can choose to do a more general reading, the latter of which I did for Paul.

If you’d like to use this same tarot formation for your pet, here’s a basic overview. 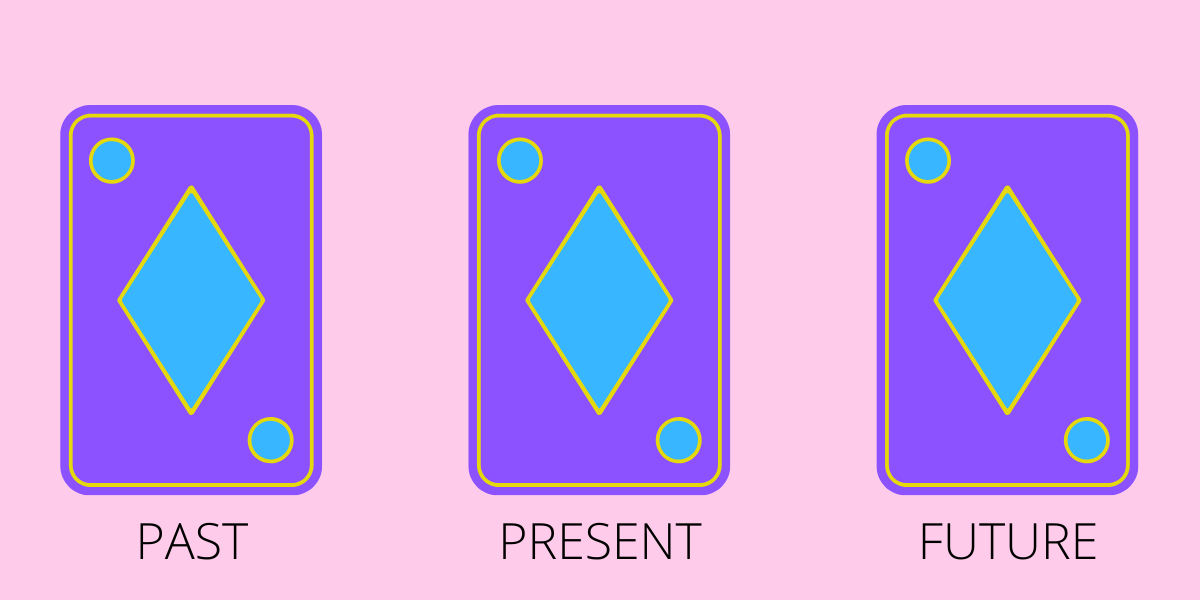 This card represents who you were, what you did, and what happened to you in the past. It can symbolize obstacles or problems that still need to be surmounted. It can also stand for what you need to take from your past into your present. Once the card is selected, the exact meaning will unfold.

This card represents who you are presently, what you are currently doing, and the challenges and opportunities you need to deal with in the here and now. In context of the past card, it can represent how things have changed for you.

This card represents who you’ll be in the future and what you’ll do. It’s not meant to provide specific details of what the future holds necessarily, but rather the general direction things are moving toward. It can symbolize the consequences of your actions or the fruits of your labor, depending on the other cards you’ve selected. All cards should be read in relation to each other.

Paul’s card selection painted an almost-too-perfect story of his past, present, and (I hope) future. It describes his journey from street cat to my soul mate. Here’s how it happened. 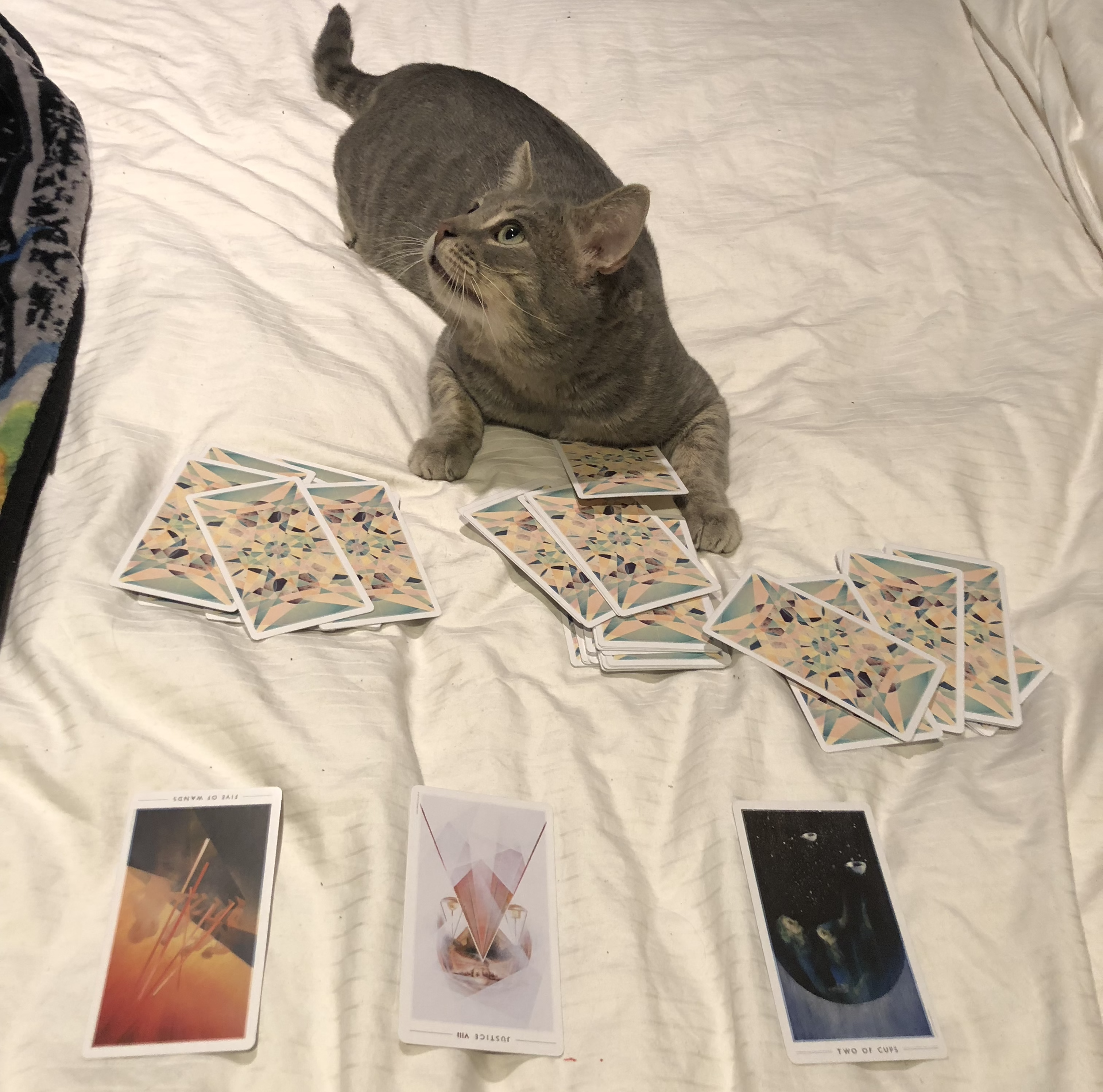 The Past: Five of Wands

Paul’s past, according to this card, has been filled with strife and conflict. Sure, growing up on the mean streets of Queens, always scrounging for your next meal, can do that to a cat. These tensions can prevent someone (or some cat) from moving forward with their lives or moving on in general.

The card predicts an important transformation that may not always be what the card holder had in mind, but will probably happen whether they like it or not. I’m sure Paul had no intention of being rescued from the streets by the shelter, but that moment would set in motion the greatest friendship of all time!

You don’t need to know a lot about tarot to know that Paul finding his forever home feels a lot like justice, so picking this card was just icing on the cake. This card represents something good or well-deserved happening to its holder. Justice isn’t dispensed willy-nilly either; the scales in the illustration demonstrate fairness and a commitment to doling out consequences as well as perks to the holder based on what they deserve.

By that logic, my adopting Paul wasn’t luck or coincidence — it’s just sweet, sweet karma for being the cutest cat in existence.

The Future: Two of Cups

By the time I turned this card over, I was clapping. This little fuzzball — my little fuzzball — pulled the card for soulmates. I’m not superstitious or even a little stitious, but I truly believe it was meant for me and him.

The two refers to a blossoming new union and the cups represent the bountiful love shared between us. If the future is full of love between me and Paul, the future is bright.

It’s been over a year since I read Paul’s tarot and I think back on it often, especially as he and I grow more and more soul-bonded every day. The story the tarot painted of Paul’s journey from street cat to pampered prince is a fairytale I couldn’t put into words. Paul isn’t just my best friend, he’s my soul mate. It’s written in the cards!