Do Dogs Dream? What Really Happens When Your Best Friend Falls Asleep

There are few things I love more than cuddling up with my dogs and taking a nap. Part of that distinct pleasure is watching the fur babies sleep. While we always hope they will sleep peacefully (so that we might also have a chance of sleeping), sometimes they’ll be restless, moving around, or tossing and turning. Other times they may whimper in their sleep or appear to smile. It seems rather like how a human having a dream would act. So do dogs dream, too? According to the experts, it’s actually quite likely that our dogs are having dreams, both good and bad, as well!

The problem with this question is that, much like other things we wonder about what our dogs are thinking or feeling, we can’t really ask them. Or we can ask them, but we can’t really receive an answer we’ll fully understand.

“While we would love to be able to ask dogs if they dream (along with a whole lot of other questions!), we can’t,” explains Christie Long, DVM, head of Veterinary Medicine at Modern Animal. “However, research shows that dogs do experience REM sleep just like humans, and given that this is the sleep phase during which most dreaming occurs in humans, we can conclude with some certainty that dogs experience dreaming then as well,” says Long.

What Do Dogs Dream About?

That said, we have some idea what is going on in their head during those dreams. “It is generally believed that dogs dream about the activities that they do during the day,” says Mary R. Burch, Ph.D., a certified applied animal behaviorist and director of the AKC’s Canine Good Citizen Program. “Many of us have seen the family dog fall asleep, have his breathing become somewhat shallow and then his foot begins to move. In dreamland, this dog may be running or chasing a rabbit!” says Burch. 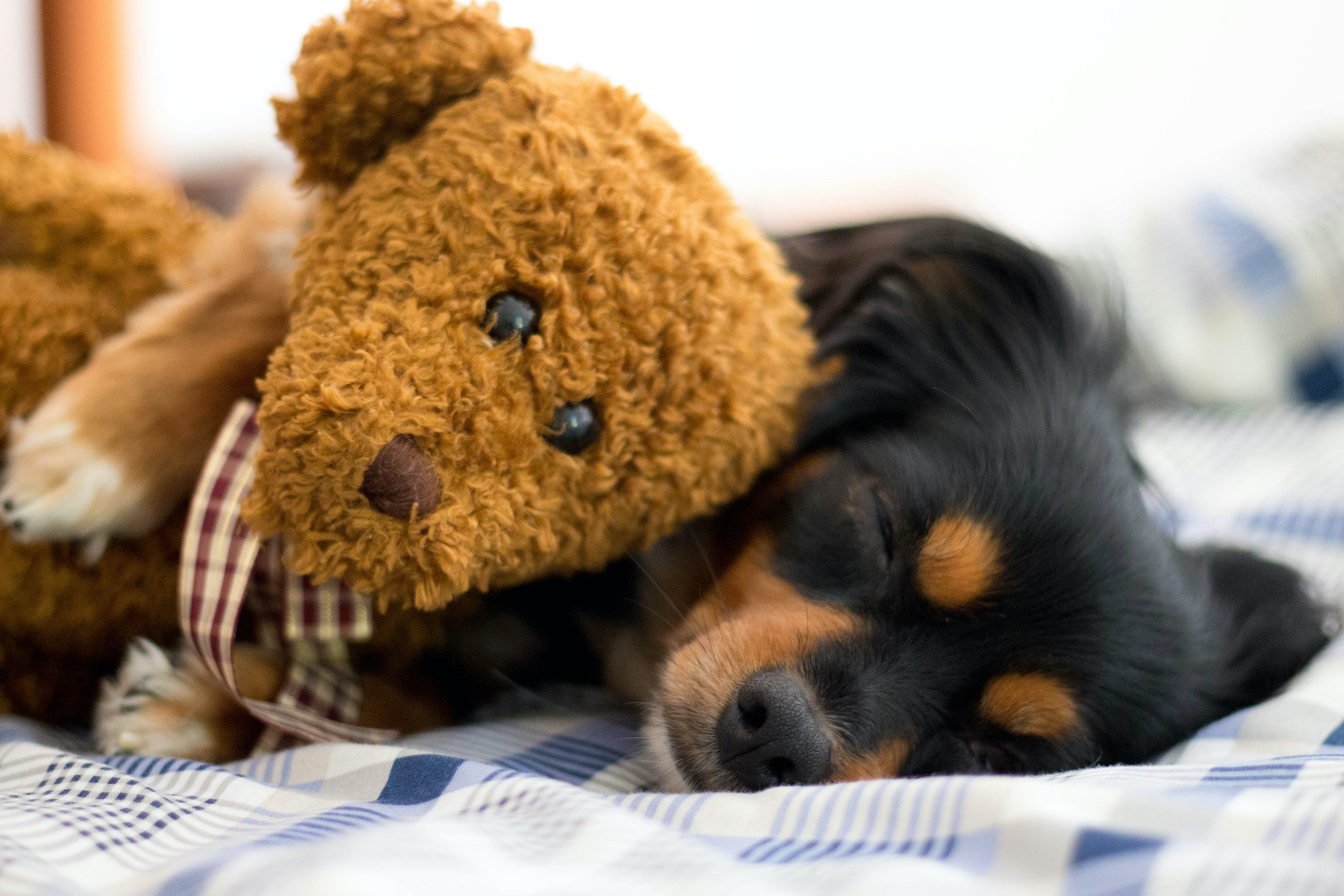 Of course, we all want our fur babies to be having the best of all dreams. No one wants to imagine they are upset or scared! But, as with people, bad dreams do happen. “If a dog has had a bad experience during the day, such as a small dog being threatened traumatized by a larger dog, this might be the subject of a bad dream,” says Burch.

But in that situation, what do we do? Do we wake them up? Or comfort them in some way? Tread carefully in that area… ”Even if a dog begins to twitch, it is not a good idea to wake dogs up every time a dream is expected. If extreme, frequent behaviors are noticed during sleep, talk to your dog’s veterinarian,” offered Burch.

Of course, it’s never a bad idea to give them more hugs during their waking hours if there seems to be something on their mind that is having an impact on their sleep!

While we can never be certain exactly what our dogs are dreaming about, it’s pretty likely they are dreaming about something. The physical signs are often there, and we’ve all seen them. “Even well-exercised dogs that collapse into bed at night with exhaustion can be seen twitching, kicking their feet as if they’re running, and even vocalizing,” said Long.

It’s Fair To Say, Those Dreams ARE Happening

Unfortunately, there’s never a way to know exactly what is going on in our pups’ brains (we wish!), research has been done on simpler, less evolved animals. “Scientific studies on rats have shown that they have electrical sequences during sleep that is consistent with dreaming,” said Johnna Devereaux, a clinical pet nutritionist.

As dogs have a similar brain structure to humans and as their brains are much more complex than rats’, it’s reasonable to assume that dogs dream too! “You can also take a look at your sleeping friend for proof. While in a deep sleep their breathing will be regular and movement nonexistent, but when they are dreaming, their breath may become irregular and shallow and body twitches can be seen,” said Devereaux.

So, all we can do is keep them happy and healthy, which is always our goal! Making sure your dog gets plenty of exercise and has plenty of enjoyable activities during the day will help him have sweet dreams.

Let’s just try to make sure our dogs’ dreams are as good as possible! (And maybe give them more frequent hugs if a not-so-good one is going on.)