5 Reasons To Send Your Dog To Obedience School

I volunteered for a couple of years at the Kentucky Humane Society (KHS) before I adopted my dog, Parker. I met a few people who worked as animal behavioral specialists during my time at KHS. So when Parker came home with me, I enrolled him in an obedience training class as soon as I could, because I understood how essential it is. Here’s how it could help you and your dog, too.

1. It socializes your dog and teaches them manners.

Like human babies, puppies don’t know how to behave around others. They do whatever they want without thinking about the consequences. However, socialization teaches young dogs how to behave in ways that humans, and other dogs, find acceptable.

You should start socializing your dog when they’re about 7 weeks old, according the American Kennel Club (AKC). Socialization involves introducing your new dog to people, places, and animals. Obedience school checks all of those boxes.

A good obedience school does more than teach your dog to follow commands. It improves your pup’s manners so they can get along with other dogs and humans in a variety of situations. Over a few weeks of training, you can watch your wild puppy transform into a well-mannered dog that feels at home in the world.

2. It helps you develop a better relationship with your dog.

Kat Rooks, the Behavior Manager at KHS, told me early on that obedience school focuses on owners as much as it does dogs. “I spend a lot of time training owners,” she says. “Part of my job is teaching people how to teach their dogs.”

That’s because the average person doesn’t understand dog behavior. And when you don’t understand your dog, you can’t train them well. Instead, you might get angry when your dog misbehaves, but yelling will only teach your dog to fear or ignore you.

Positive reinforcement fosters a closer relationship between people and dogs, according to the AKC. Parker’s obedience course used a method called clicker training. When I gave a command (“sit”), I would wait for him to make a sitting motion. Anything that resembled a sit got a click and a reward. Eventually, he figured out that he would get a treat for sitting on command.

Today, Parker sits when I ask him to (unless it’s really cold outside — then he gives me a look that says, “Would you put your butt on this freezing ground?”). He can also lie down, fetch, drop it, and high five.

Thanks to proper training, Parker and I understand what we want from each other. In addition, I learned how to teach Parker new commands. It’s good mental exercise for him, and it gives us a reason to get off the couch and interact.

3. It protects your dog from potential danger.

Two of the most important commands Parker knows are “sit” and “drop it,” because they protect him from doing dangerous things. When I see him gnawing at something in the yard, I can yell “drop it” from the deck. There’s no way of knowing how many stomachaches the “drop it” command has prevented.

“Sit” has saved Parker’s life. Once, while walking on a path in Golden Gate National Parks Conservancy, Parker managed to get off-leash and run toward traffic. I screamed “sit!” as loudly as I could. To my surprise, he stopped, sat, and looked back at me for his reward. Obedience training that teaches dogs to stop when they unknowingly run toward danger, which gives you one of the most effective tools to keep your furry pal safe.

4. It can prevent your dog from biting.

In most cases, a well-socialized dog doesn’t feel as much anxiety and fear as a dog that hasn’t been socialized. With less anxiety, dogs can approach new people and situations without feeling that fear that makes them bite (which is good news for your mailman!).

A study published in 2018 in Animal Behavior and Cognition found that dogs with anxiety exhibited more signs of fear when they encounter dog-like robots compared to dogs without anxiety.

The study even explains that taking your puppy to an obedience school and socializing them can help reduce the anxiety that leads to biting as an adult dog. 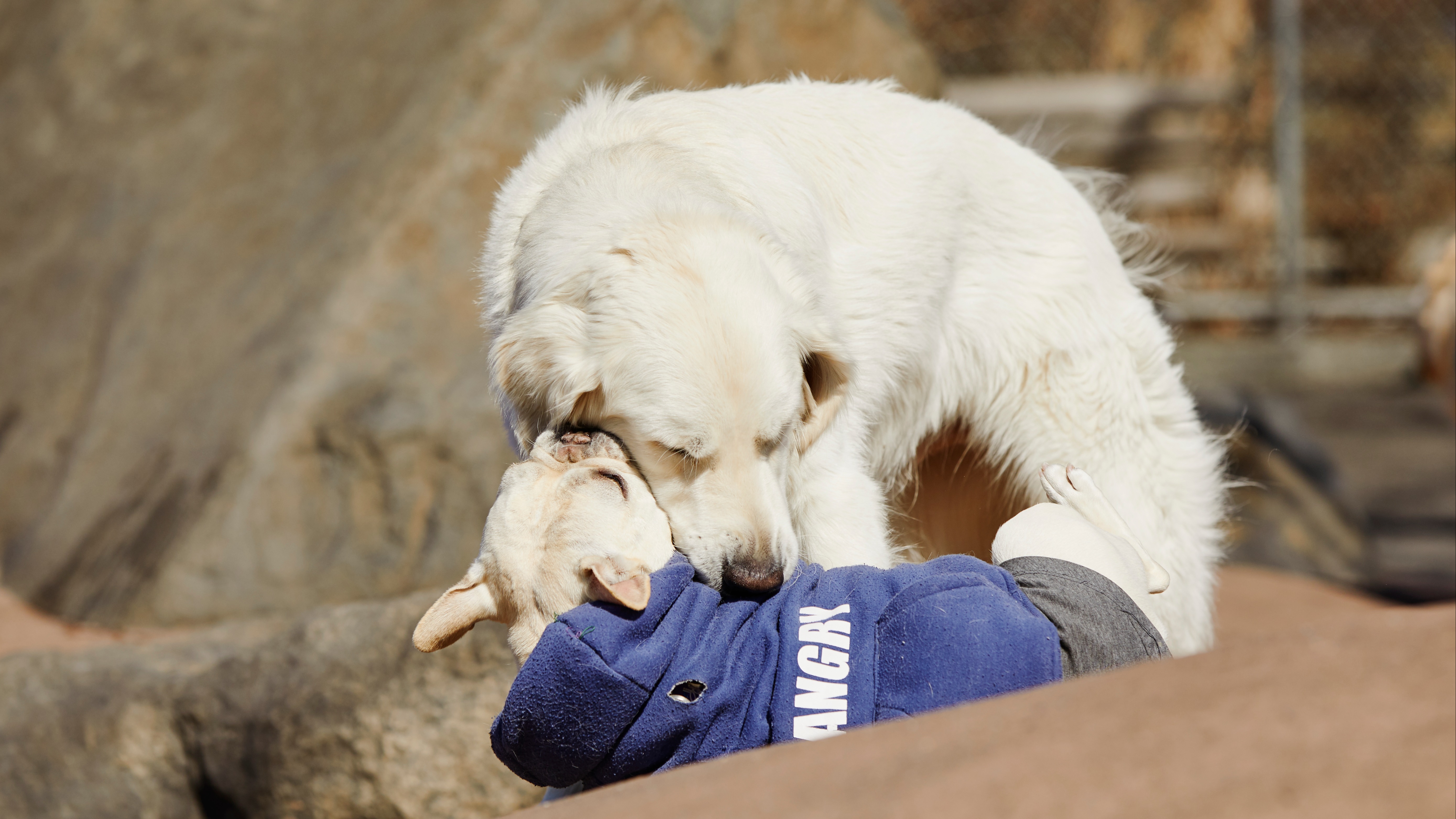 5. It protects your home — and keeps you together.

A dog’s bad behavior can destroy a home. Untrained dogs may chew on furniture, scratch doors, and go to the bathroom inside.

In fact, one of the main reasons people choose to rehome their dog is bad behavior, according to survey findings published in October 2015 in the Open Journal of Animal Sciences. And nearly 35 percent of survey respondents reported that low-cost or free access to training could have helped them keep their dogs.

Obedience school can help you train your dog to be a quality member of your family — not a nuisance — so you can enjoy each other’s company for years to come.

Dogs need people to teach them how to behave. Obedience school is a good option for training, especially if you have never trained a dog before. Without obedience school, it’s unlikely that Parker and I would have such a close relationship that lets us travel together peacefully and safely.